This paradox is captured by the Blind Men and the Elephant.  Each has their own perspective, perceiving the world in their own way.  To maximize the view of one over the others risks perceiving little of reality.  The task is to first acknowledge the reasonable, even if different, view of each and then strive to resolve the contradictions among them.  My intent is to resolve this dilemma, and those described above by creating a novel technology to help find overlaps among our diverse understandings, while providing a lens through which this understanding of ourselves in the physical world is expanded.
Below are a series of projects that describe my journey to create this new technology that is not merely mechanical, and whose behavior can adapt and complexify in response to its environment, not unlike sentient creatures.  The intent is to better understand our own capacity to navigate the paradoxical terrain into the future by building a technology that doesn't abet our over-coherent, insulated and wasteful relationship with the only known biosphere.  It intends to augment our individual and social capacity to perceive the wider existential implications of our choices.
World Trade Center Memorial Competition
World Trade Center Memorial Design Competition Entry; 2003
Design - 3D AutoCAD, 3DS Max, Photoshop
Unbuilt​​​​​​​
This rather ambitious task started with a seemingly simple and practical intent.  I wanted to make an interactive sculpture that transcends current New Media.  More than a mechanical or algorithmic stimulus-response interaction with passersby, I wanted to create an immersive experience where the architectural artifice had a literal sentient relationship with human visitors.
Back in 2003, to do this, I proposed a transparent obelisk that would display a dynamic 3D abstract pattern.  It was an interpretation of sensed motion, heat, sound, and other patterns of visitors to the site (upper image below).  Individual participants would figuratively see themselves reflected in the proposed 3D display (lower left image); while, many participants would see both themselves and the abstract patterns of others superposed in real-time (lower right image).  Based on sensing people, past and present, the dynamic pattern would evolve to create ever-novel and increasingly complex "patterns of patterns".
The intent was for people to imagine themselves among others in a non-judgmental abstract way.  I wanted them to see themselves as distinct while inter-related, simultaneously.  Over time, patterns would be selected by the system that tended to attract more people, thereby increasing its own impact.  This was my response to the acrimony of the 9/11 attack. 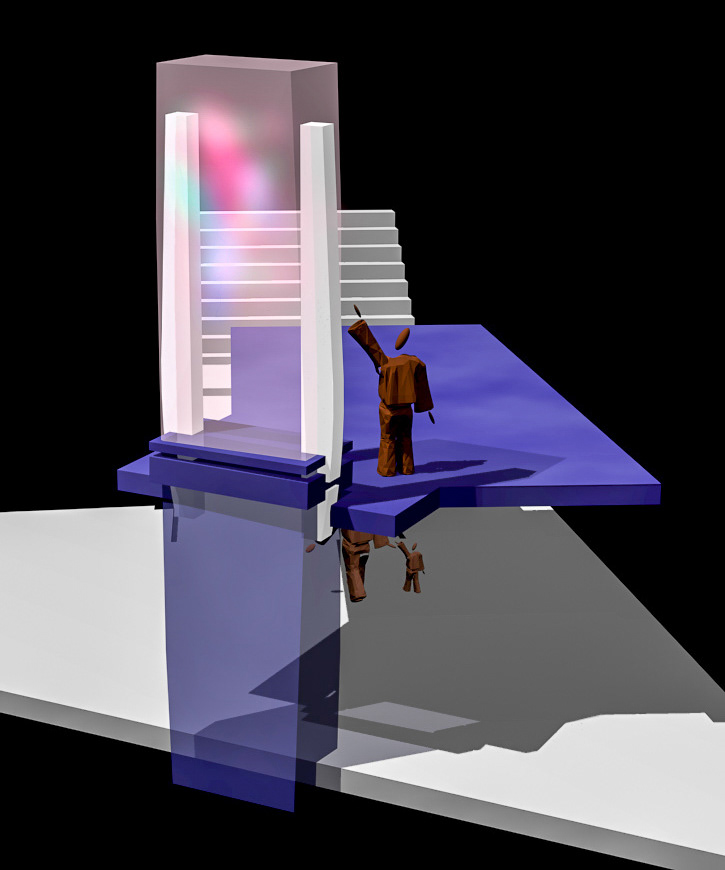 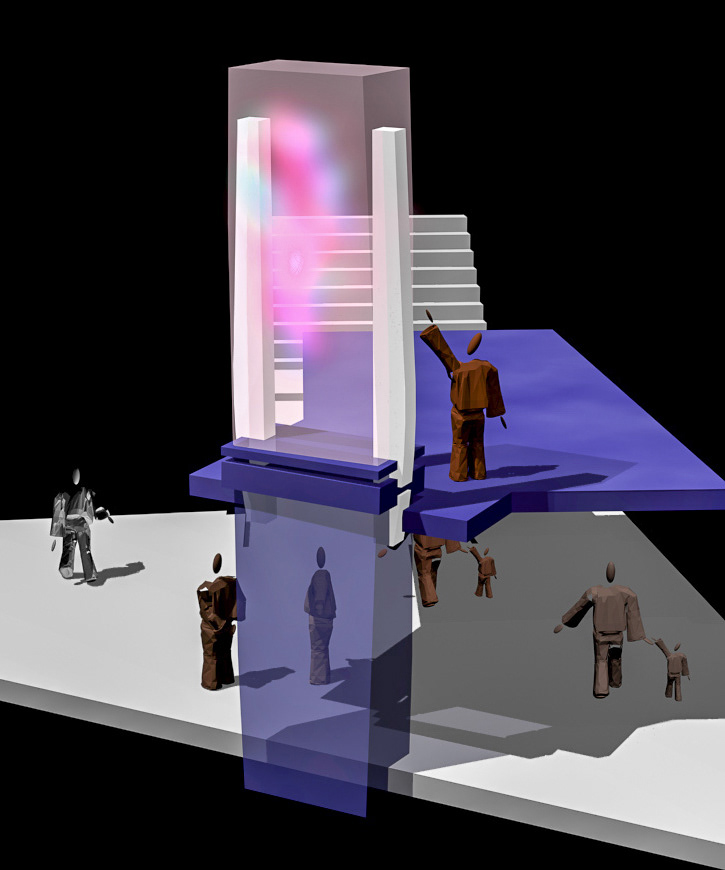 Below is a diagram of my nascent attempt at a rigorous description.  Creating that diagram generated many more questions than answers and set the stage for a decade of investigation into how exactly a technology could be built that would literally sense its environment and continuously synthesize novel higher-order patterns based on those sensory inputs.

Improbable Monument
Studio project within the Conceptual and Information Arts, San Francisco State Univ.; 2007
Design - AutoCAD, 3Ds MAX and Photoshop
Unbuilt
To implement the art installation above, as early as 2004, I was fascinated by artificial neural networks, not unlike those under the hood of current Deep Learning implementations; however, once I read a number of neuroscience papers and investigated some of the critiques of “brain as computer” by John Searle, Hubert Dreyfus and Rodney Brooks, I realized that my goal of sentience wasn’t down any purely digital road.  So, I went to many lectures at the Helen Wills Neuroscience Institute at UC Berkeley, and was part of a neuroscience study in Professor Levi’s perception lab.
In 2007, I applied and was accepted to the Conceptual Information Arts program at San Francisco State under Steven Wilson at the time.  Although nascent and only intuitive in its nature at that time, I made this video for acceptance to the program describing my artistic medium: SFSU Application Video
But, after a semester I realized that my technology, or "medium", able to implement my proposed "sentient observatories" was not ready.  After SF State I recommitted myself to rigorously articulate both the design to build and theory to test what I then called "synthetic cognition".  And for technical implementation purposes, between 2007 and 2009, I completed the analog and digital circuit design tracks at San Francisco City College along with JAVA programming. 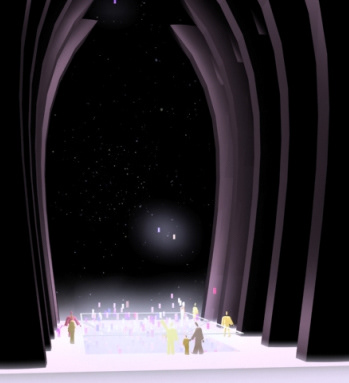 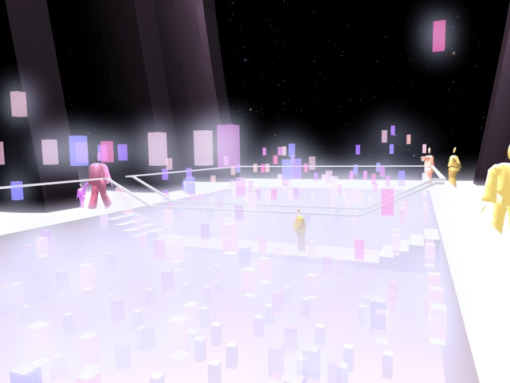 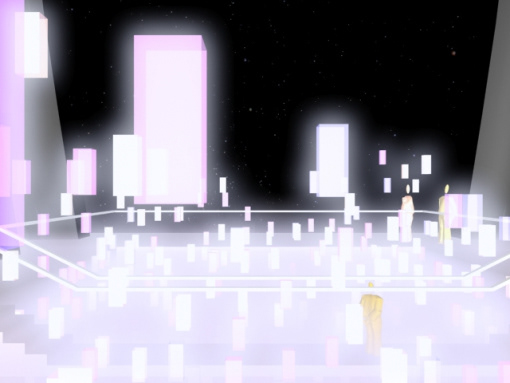 And, although my semester at SF State didn't render my technology any more rigorous, it did help me refine my artistic intent.  The project shown above was an attempt to better integrate a built structure with an immersive and interactive experience.  This project links the artistic intent in my World Trade Center Memorial design to the body of work at Studio for Public Spaces, which further develops and realizes my art installation practice.
As an "Improbable Monument", it intended to challenge the idea that the permanence of memory relies on the static and immobile rigidity of a traditional monument.  Like Heraclitus's river allegory, actual memories in the brain are paradoxically maintained through change.  They are adapted by subsequent experiences to maintain their relevance in a changing world.  Visitor stimulation is necessary for this maintenance, just as humans must have stimulation.
S.O.A.R.S.E.
Schematic design for a Self Organizing Autonomous Resonant Superposition Engine; 2011
Design - AutoCAD, 3Ds MAX, Photoshop
Build - analog sensors and physical 3D nodal matrix with an abstract digital data structure
My work on the Improbable Monument at SF State helped me realize how much further I still had to go to realize a viable implementation for anything approximating animal sentience.  So, from 2007 to the end of 2011, I focused entirely on that implementation, which is summarized briefly below.
To understand its non-exotic, if novel and unfamiliar, nature it helps to understand my original inspirations for SOARSE.  The precipitating event was the trivial observation of sunlight reflecting off a baking dish in my kitchen.  The light shown on a wall, illuminating undulating waves, a sort of gossamer of dancing light.  I marveled at how much information was contained in that simple, yet dynamic, reflection; and, I also realized that this information was, in a sense, a physical proto-interpretation, or representation, of many simultaneous inter-dependent events: the sun's angle; the geometry of the dish and its constraints on the waves; the water properties; perturbation of the dish; and, the 2D wall.
This observation galvanized two other core inspirations: my study of quantum mechanics at UC Santa Barbara and my exposure to Colin Rowe's Transparency: Literal and Phenomenal at CU Denver.  The conceptual and practical take-away from these two deep subjects is the concept of superposition.  Briefly, the problem of sensing and knowing rests on the capacity to realize not just individual things in the mind, but the interplay between them, simultaneously.  In other words, some physical medium must embody and superpose both the distinct patterns and their inter-dependencies, simultaneously.  For example, knowing a few things about an apple - like color, shape, feel and taste - and their inter-dependencies is significantly more useful than knowing infinitely many isolated things.  These myriad physically embodied inter-dependencies, like the waves in the baking dish, are the scaffold upon which higher-order conception can be accrued.
But, how does one make this? 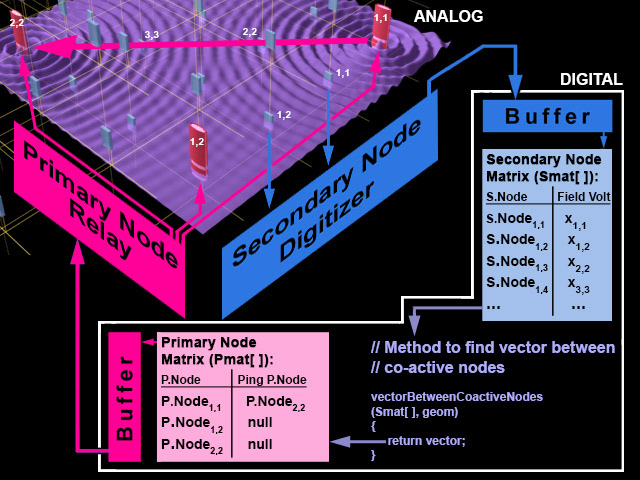 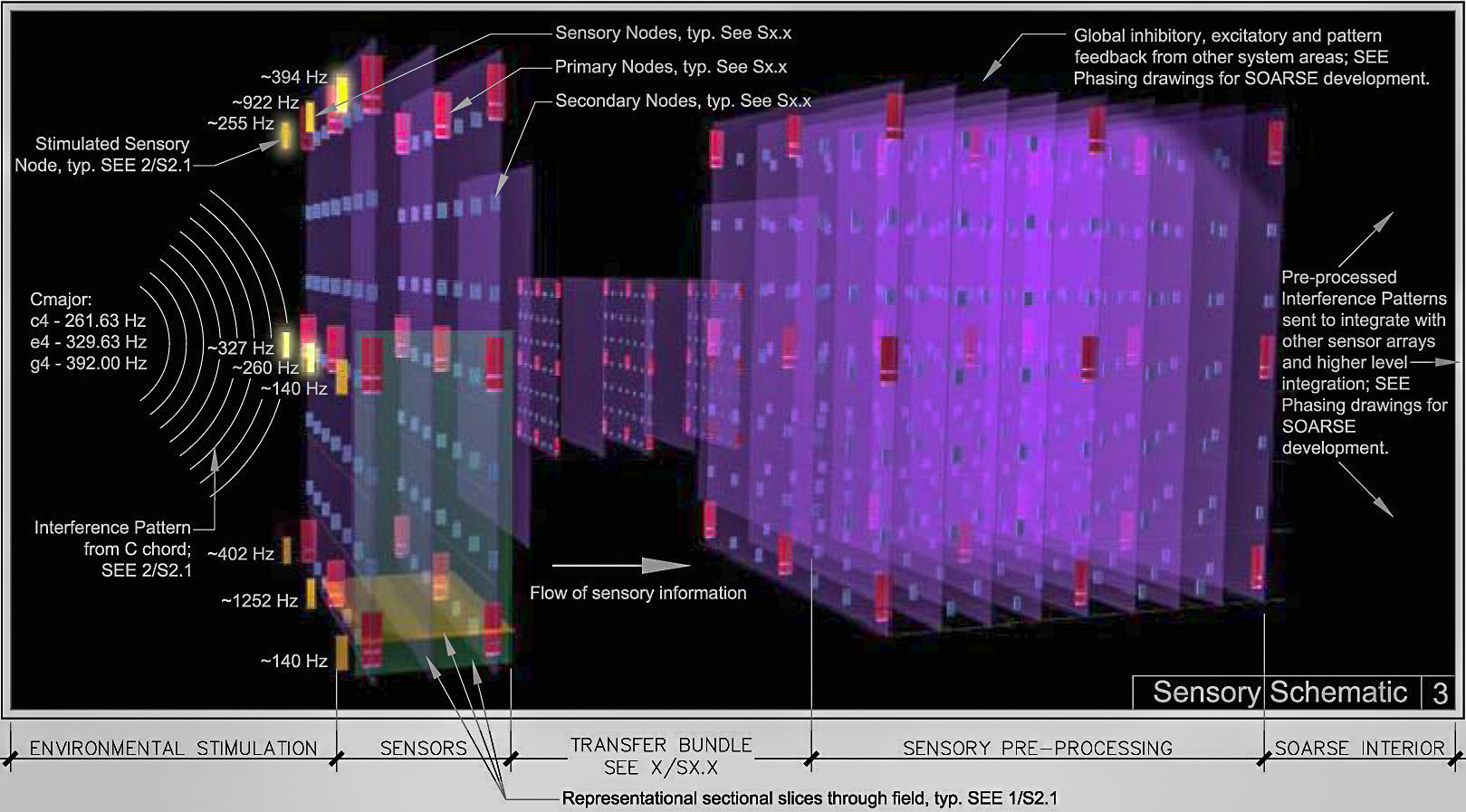